Day of Reckoning Approaching for Market

A day of reckoning is approaching for the US stock market. The market’s math simply does not add up. The math not adding up was why I recommended to all the readers of my September 2007, Equities Magazine column to get out of the five largest brokers including Lehman, Bear Stearns and Merrill Lynch. 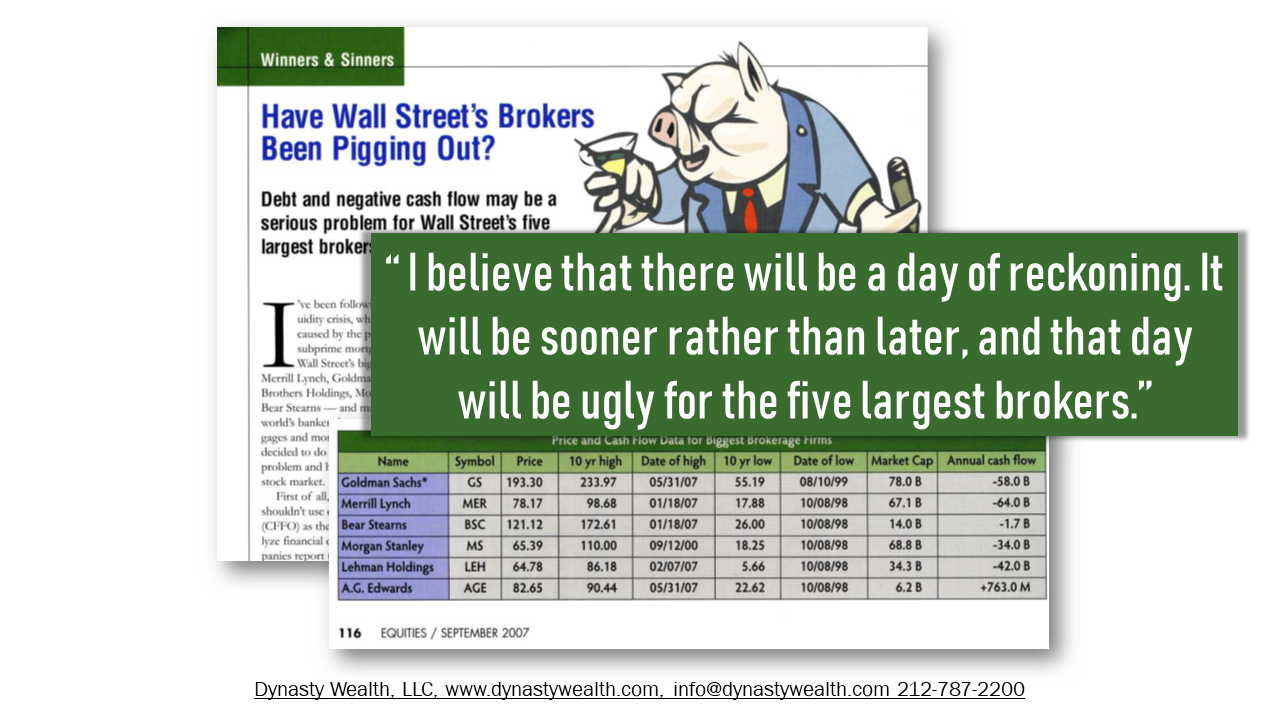 The S&P 500 is extremely vulnerable to a substantial, extended correction that will be caused by the significant decline of FANGAM, an index which is comprised of six of its technology member companies. FANGAM includes the following S&P 500 technology companies: 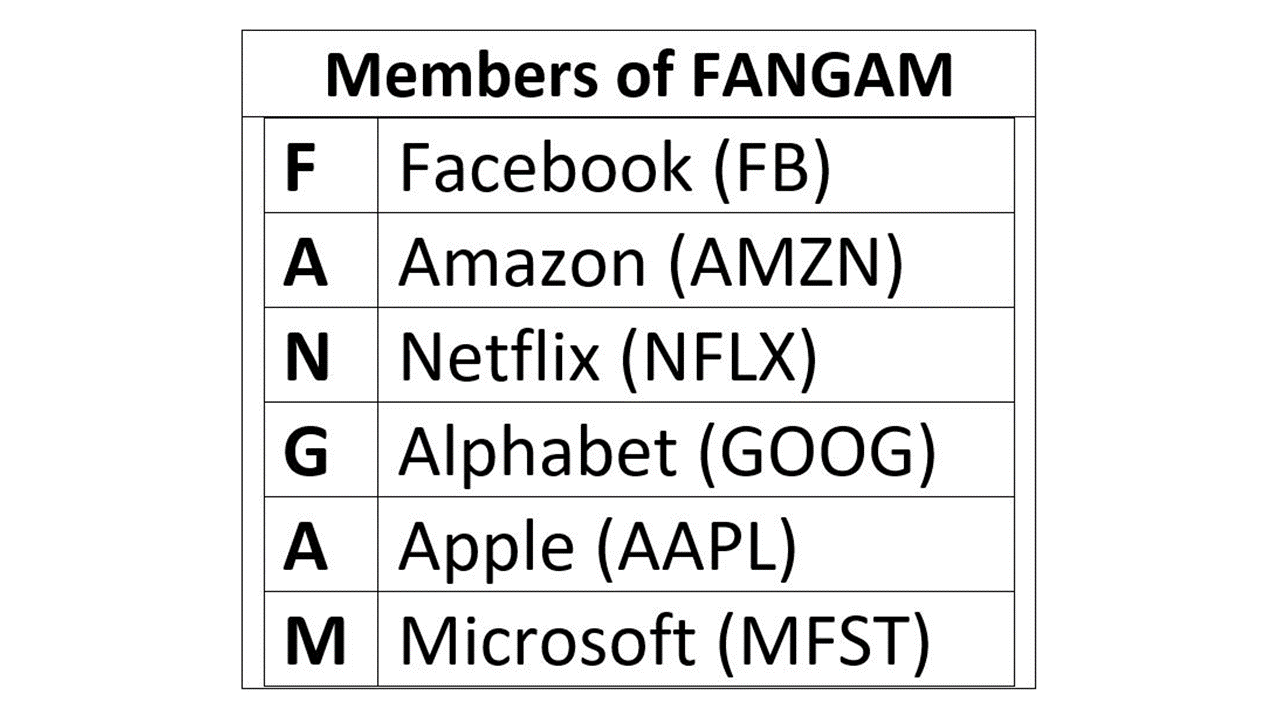 By the sheer laws of mathematics and gravity, the heady performance of FANGAM is unsustainable. FANGAM’s six members have created a Catch 22 for the S&P 500. Should the market cap of FANGAM:

The market cap CAGR of 42% for FANGAM for its 12 months ended September 1, 2018 is out of control when compared to the growth of its fundamentals. For the latest fiscal-year the revenue of FANGAM increased by 19%. FANGAM’s five-year CAGR comparisons are much more realistic; market cap growth of 28.9% compared to its revenue growth of 36.4%. 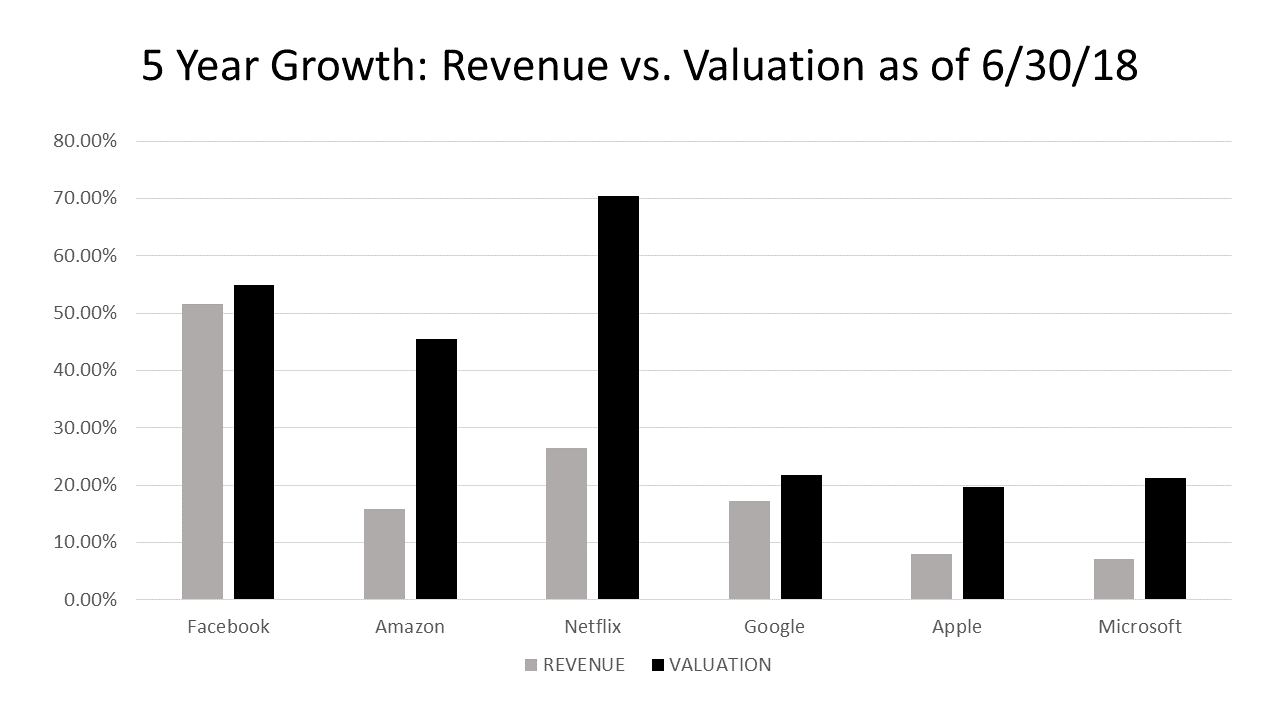 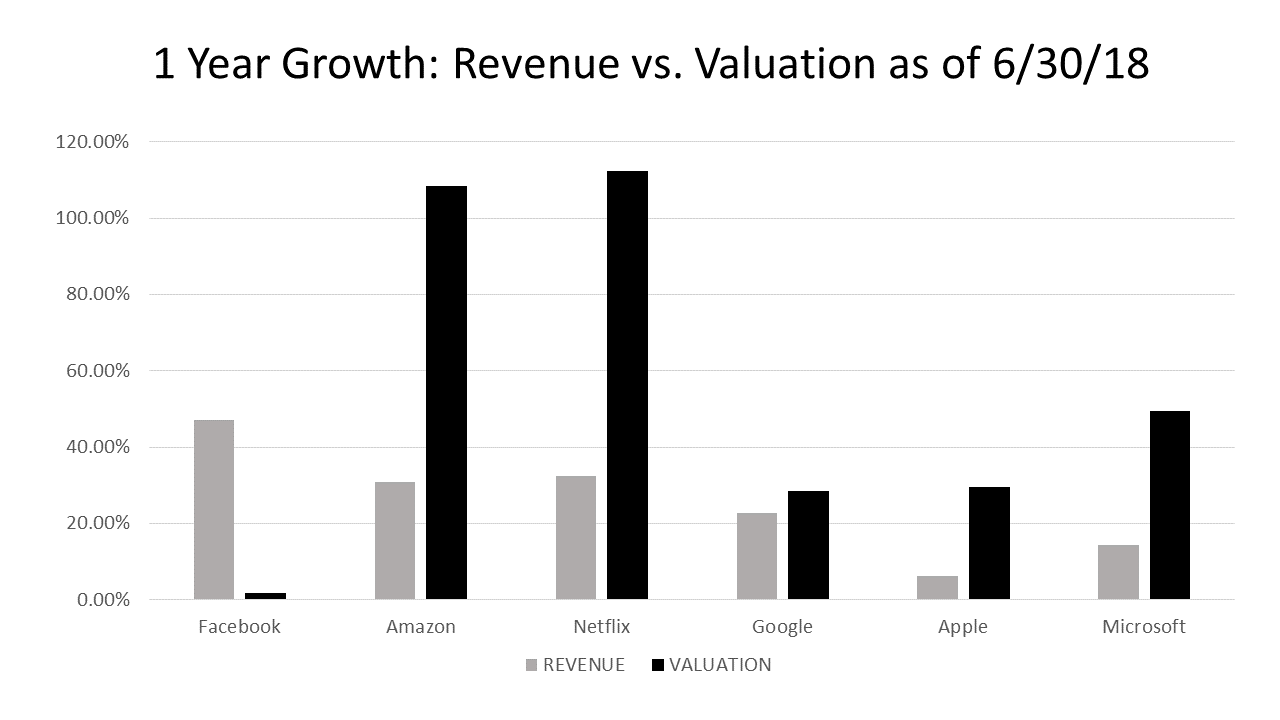 The chart below depicts CAGRs for the market caps and revenue of all of FANGAM’s members for the 12 months ended June 30, 2018. The market cap CAGR for all of the six members with the exception being Facebook exceeded the CAGR of their revenue. 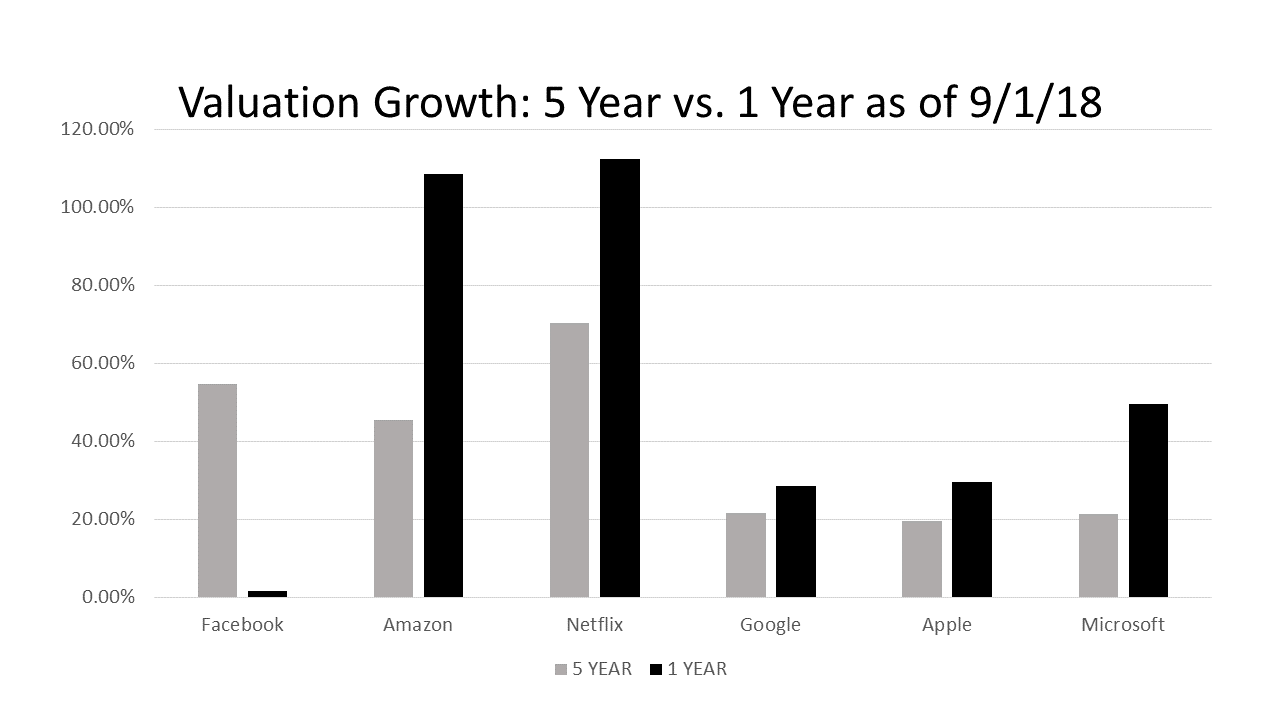 Based on the disparity between FANGAM’s CAGRs for its market cap and revenue, there are only two things that can happen: 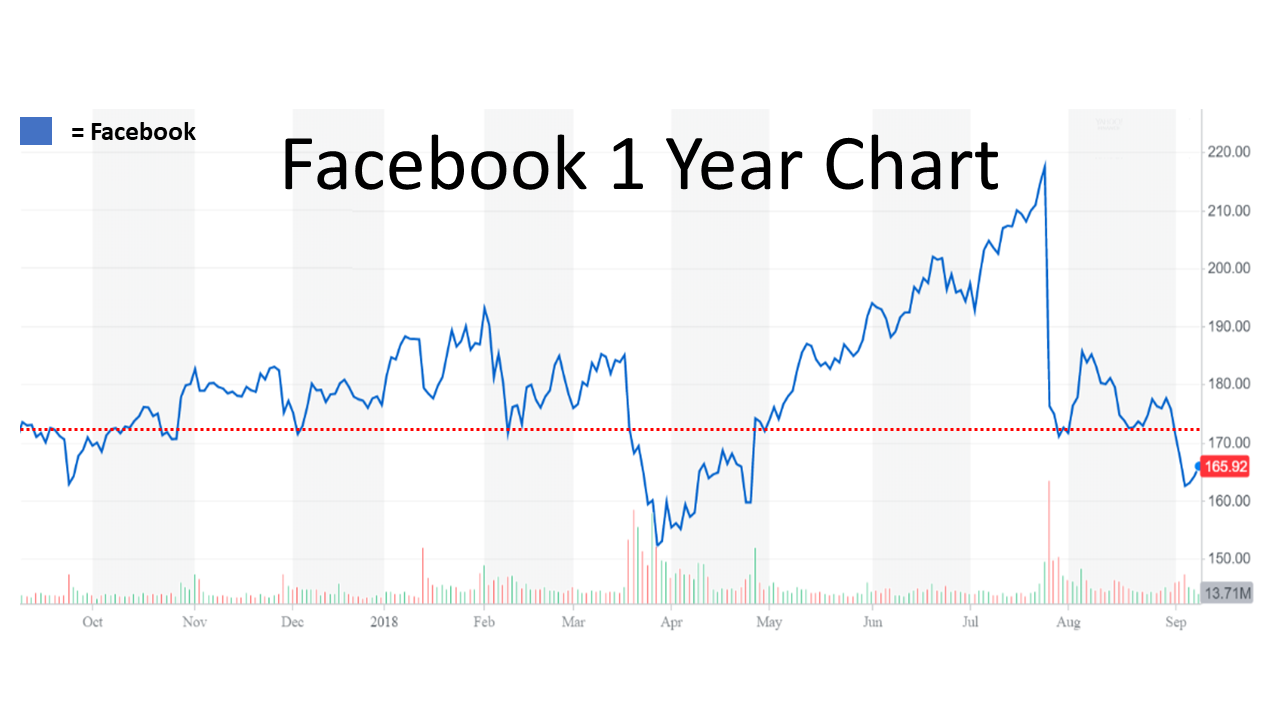 The table below depicts the performance of the S&P 500 for select periods of nine years or more since 1928. All periods in excess of nine years resulted in the S&P 500 increasing at a CAGR rate which was below 7.75%. The nine-year periods of double-digit returns were followed by secular bears which resulted in average high single digit returns over multiple decade periods. 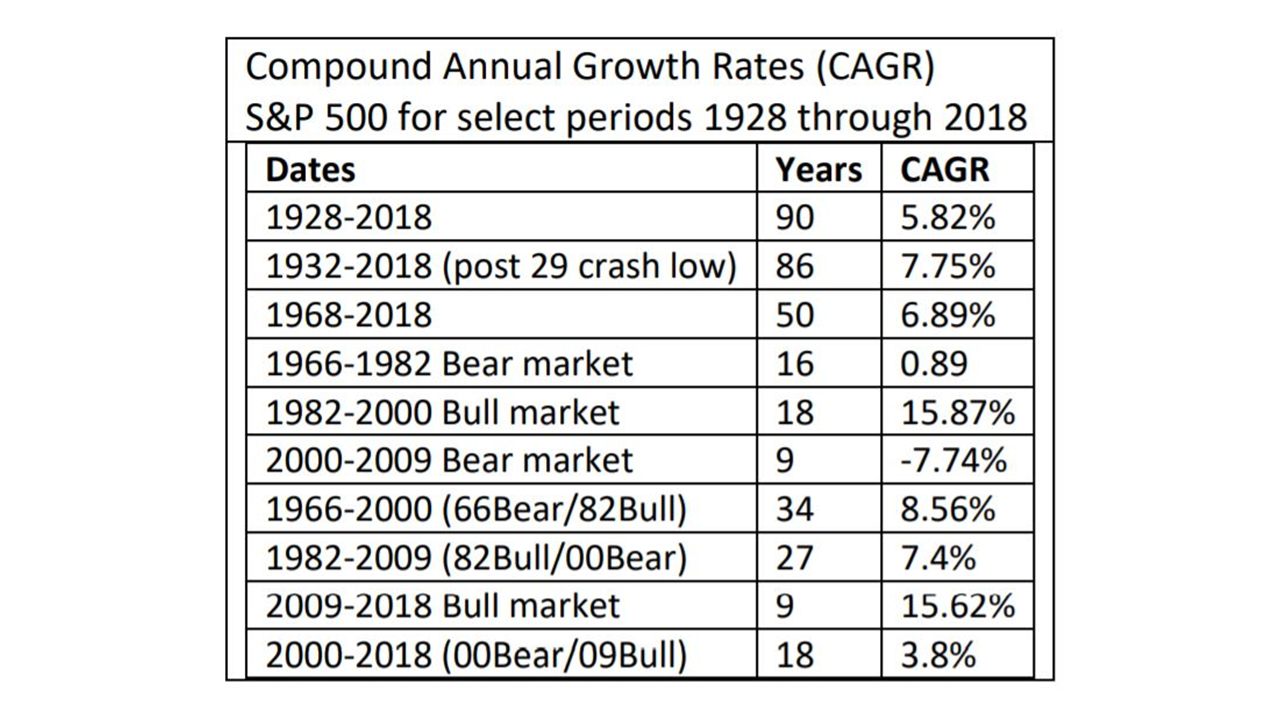 The reason why the stock market for any and every developed and emerging country has a single digit growth rate ceiling is because the growth rates of economies and stock markets are directly related to population growth and inflation. The highest growth rate for the US population since the 1950s was just below 2%. Since 1913 the average rate of inflation in the US is 3.18%.

The charts of Japan’s and the US’ populations and projections for 1950 through 2050 as well as the performance of their respective stock markets from 1980 to 2018, shown below, further support why the S&P 500 cannot produce double digital returns for investors over the long term. 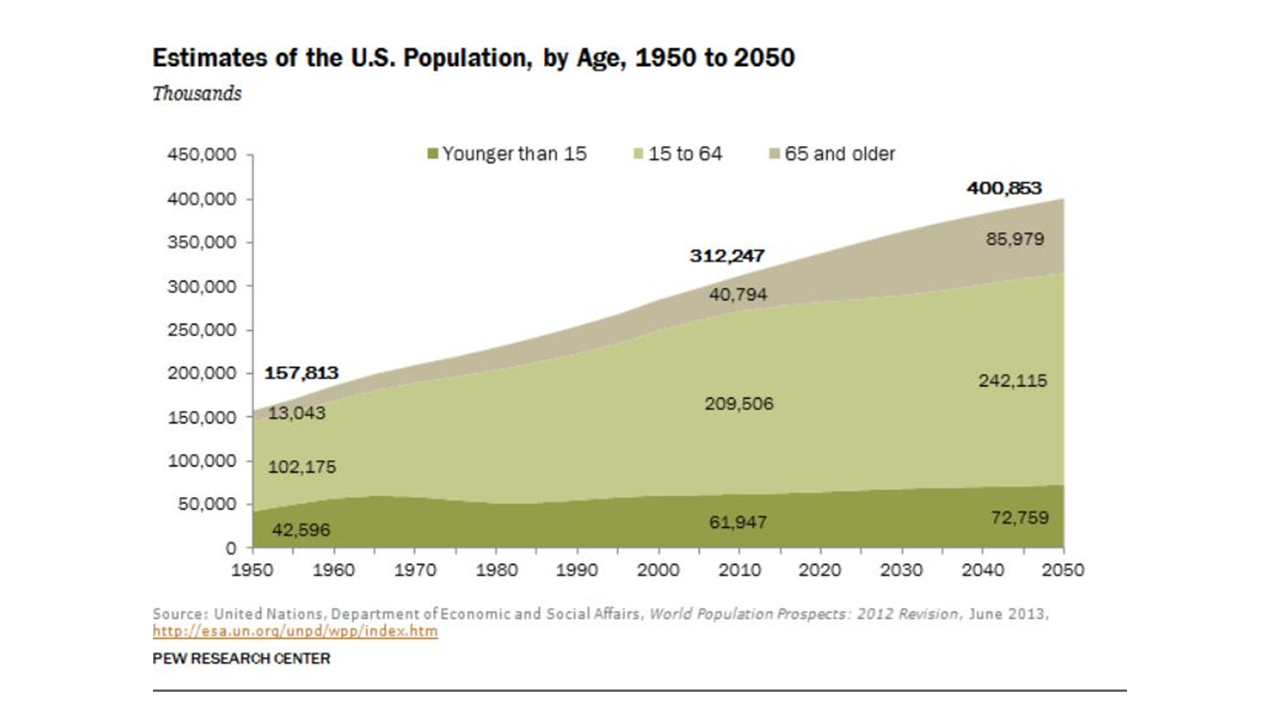 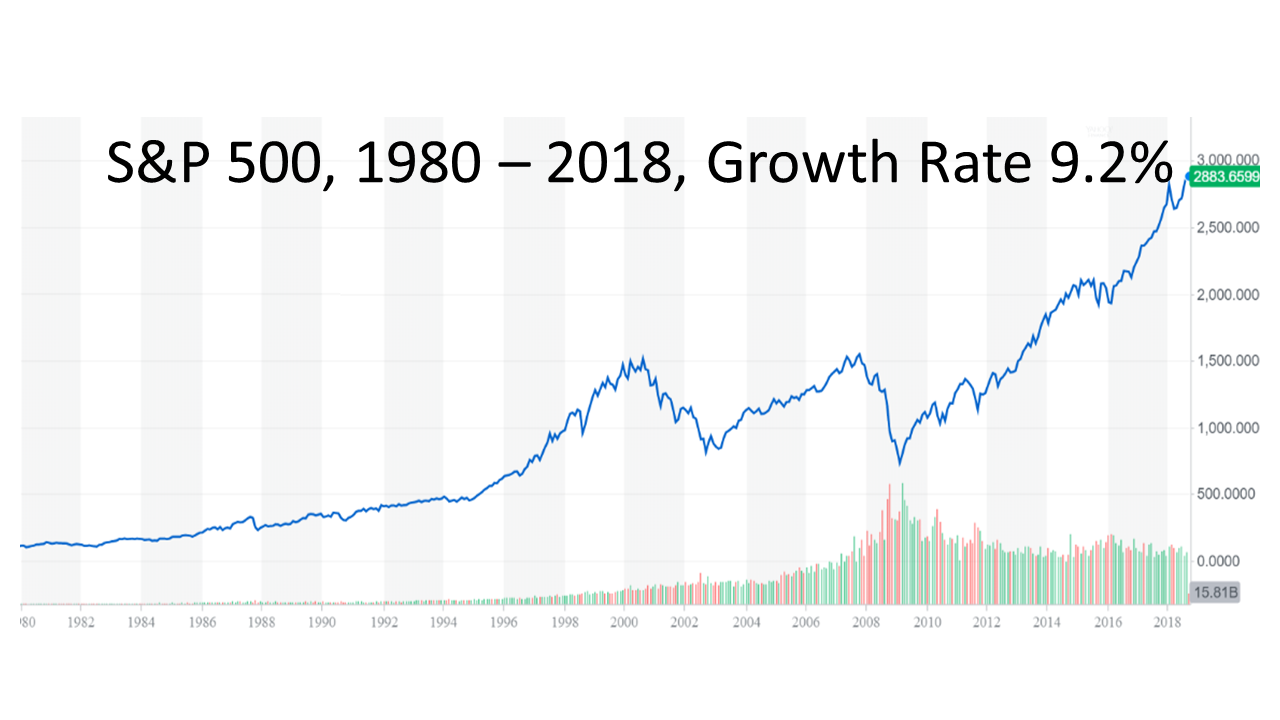 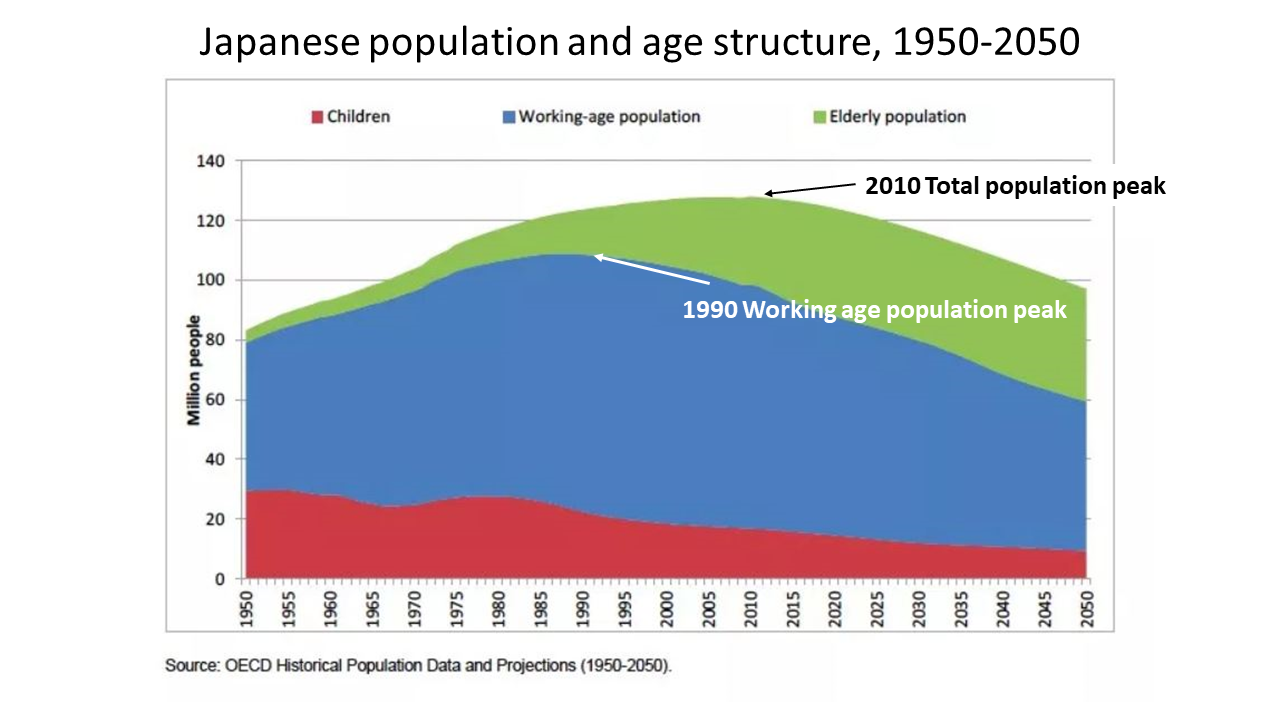 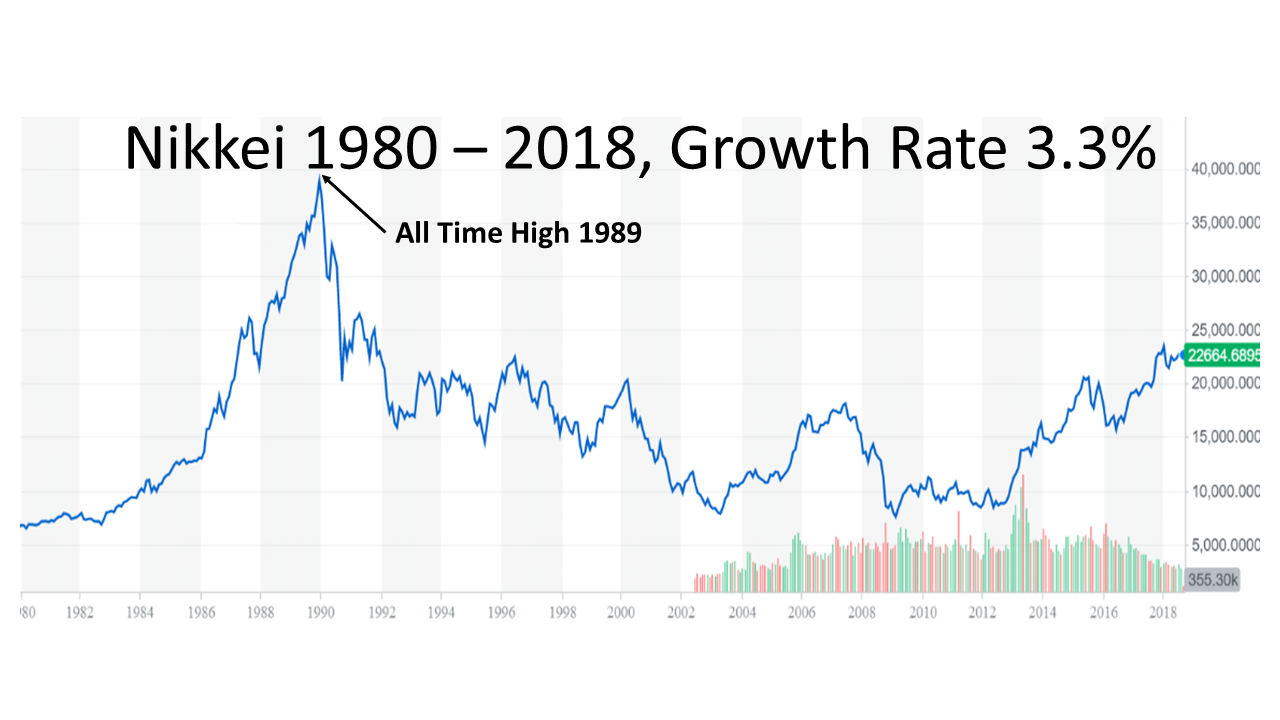 The bottom line is that the math for FANGAM and the S&P 500 does not add up. Based on the market cap of the S&P 500’s CAGR increasing by 15.62% since the current bull market began in 2009, the market caps of FANGAM and the S&P 500 indices have no room to grow. The S&P 500’s long-term long trend line which is based on population growth and inflation will revert to back to its mean. That can only happen by the index declining by a minimum of 60% and the S&P 500 growing at a subdued rate for a period of 10 to 20 years. This period that the S&P 500 will soon enter is also known as a secular bear market. For information about secular bull and bear markets and the type of investments that I recommend during a secular bear market go to my website BullsnBears.com.

To better understand my math and also to learn about secular bull and bear markets and the recession investing strategies that I am recommending from now through 2030, watch my recently taped two-part interview which will air on the Fox Business Channel during the second half of October. A private and pre-screening of my interview is exclusively available to alert subscribers. Click here to subscribe to BullsNBears.com free alerts.

Below are my most recent must-read articles which pertain to the market being at high risk for a significant correction or a crash:

BullsNBears.com is loaded with information about crashes and the eleven additional research categories listed below.

DISCLOSURE: The views and opinions expressed in this article are those of the authors, and do not represent the views of equities.com. Readers should not consider statements made by the author as formal recommendations and should consult their financial advisor before making any investment decisions. To read our full disclosure, please go to: http://www.equities.com/disclaimer.